The Caterpillar and Me!

Yesterday I was busy getting a metal yard ornament ready to repaint as it is faded! It's a butterfly. So, what did I forget to bring down to the garage? A couple of small paintbrushes for the detail.

On to the next project, which was planting a few cabbage. Couldn't even get that done as I had to clean out the area first. Then interrupted myself and decided to clean out the corner where a lot of the plastic flower pots were, along with some of the tomato stakes, along with oak leaves covering a lot of it.

I then noticed there were more crocus coming up, then there were two days ago. I went upstairs to get my camera.

One of my main objectives for a picture was to see if my hyacinth was coming up yet. I headed out the front door and down the sidewalk and stopped. There was a black blob in the middle of the road. That blob was moving. Oh, it's a woolly worm (that's what I have always called that caterpillar). I got my camera ready to take a picture and walked out into the middle of the street. I took a close up, which blurred so took another and was readying the camera when I heard the sounds of a truck. Oh no, I am standing in the road! I looked up and noticed the truck was veering around me. I did the "I'm sorry, grin!" I decided to save the caterpillar. He was heading across the street so I decided to do like the turtles and picked him up and put him in the grass on the other side of the street. Whew, safe for a little while longer now! Took a couple of pictures of him in the grass and then crossed safely back and found my hyacinth.

After getting the stuff picked up, I hauled the 30 gallon refuse bag down to the back brush pile and dumped it and back up the hill and that was it for me. Never did get the cabbage planted either.

I was so tired! I crawled up my steps, got a cup of coffee and back to my computer. LOL!

Now, I did investigate the caterpillar. It is one of the Woolly varieties. It is the caterpillar for the Giant Leopard Moth. I also found out what the Black and Brown Woolly Bear Caterpillar turns into. They turn into a Isabella Tiger Moth. That's your nature lesson for today!

Moth for the Black and Brown Woolly caterpillar

By the way, here is the hyacinth. 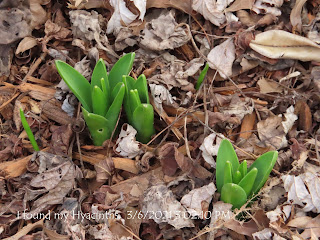