The Cleanest Starlings In My City

I have watched birds for a long time. Not just the ones appreciated by everyone, like the Cardinal and the Chickadee, but all of the birds including the sparrows and the starlings.

I am sure you know that the European Starling were brought to America in the 1890's.  I read that Shakespeare enthusiasts were responsible.  100 birds were set loose in New York's Central Park. Now we have over 200 million of them all over the states.

I bet you didn't know they were vocal mimics too. They can even copy the song of the American Robin and the Northern Flicker, both of these are also in my yard. So, now I wonder when I have heard that song, "could it be a starling instead?"

I have a heated birdbath on my deck. The birds really enjoy it! They drink and they bathe. I love it when they take a bath. So much action.  One day I took a video of the ever bathing starlings.  They didn't care if it was 18°F or 90°F, if they wanted a bath, they took a bath.

Yesterday, as I was cooking dinner and watching out my kitchen window, I noticed the starlings were in the birdbath. I took a closer look. There were eight of them in the birdbath at one time. No wonder I had to fill up the birdbath five times yesterday. They splash water all over so I have to walk very carefully to fill it up. No outside water available, so, I fill up a tea kettle and walk out and fill.  I almost took a flyer, but I regained my balance! Thank goodness!

I can't show you a picture or video of the eight birds but I do have a short video from earlier this year.  Enjoy! 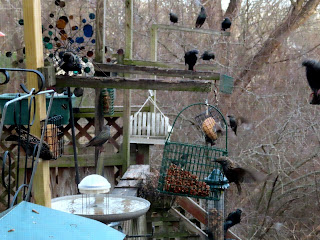 On December 23, 2020, I had so many starlings, they demolished all the suet cakes in one day!