I love to feed the birds, but the European Starlings get on my nerves. They swarm in and eat all the food from the feeders I have on my deck. Of course, they bathe in the birdbath as I stated in the previous blog, which leaves another mess that I have to clean up!

On the 18th of January, I decided to put out some meal worms for the Eastern Bluebirds. I am giving you the proper names to the birds, so you know exactly what they are.  The bluebirds flew in and located the meal worms. I had four that came. One was a female the rest were male. I was watching from my kitchen window. The blasted starlings flew in and the bluebirds left. I wasn't having none of that. By this time I had taken a picture from the kitchen window and had camera in hand.  I went to the back door opened it up and opened the storm door about 8 inches.  The starlings flew off!  I waited a couple of minutes and one of the bluebirds came back. Then another showed up. I was still standing there in the open doorway. I talked to the bluebirds. They didn't seem to mind that I was there so I started taking some pictures.

I have a Canon SX740HS. This is a little pocket camera that has a 40X Optical Zoom.  I don't set f stops, usually have the camera on auto. Been to classes several times but I just don't retain the information. I have taken some pretty awesome pictures on Auto, so, I guess that is what I will continue to do.

I looked past the bluebirds and spotted the robins in the crabapple tree several feet away. The bluebirds left so I walked slowly out on the deck and aimed at a robin feeding on the tiny crabapples on the tree.

Now to show you those pictures: 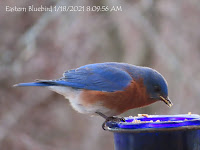 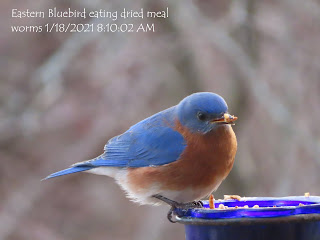 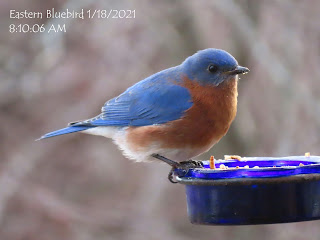 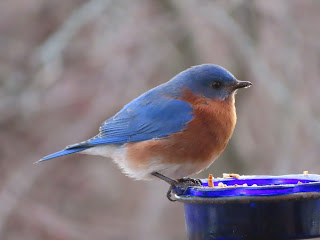 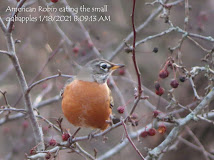 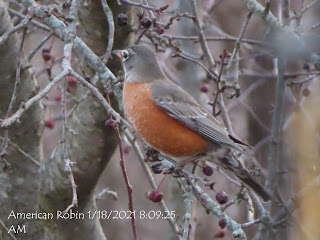 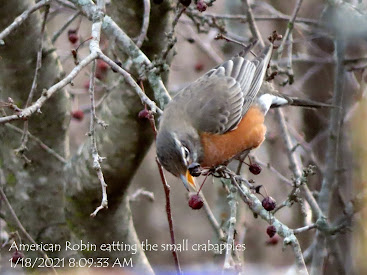 My favorite picture of the American Robin