My hubby came in and told me it was snowing like crazy! Really?  I just had let the dogs out and dried them off from the rain.

I looked out my window and saw some snow.  I got up from my computer, did a few things, went and looked out my kitchen window and, indeed, it was snowing pretty heavy at that time.  I went back by my computer and grabbed my camera. This was the first snow for me, since the beginning of the year.

First birds I noticed were the sparrows. I looked out and saw Cardinals in the flowering crab. They were farther then I wanted for a decent picture, so I stepped out on the deck and very carefully walked across the deck that already had some ice on it.  I checked and saw a Cardinal eating the little crab apples.  I know the Robin eats these too. I have a couple of marvelous pictures of them.  I snapped a picture and then realized there was a female just below the male. Another picture taken. Then another male. I finally came in the house, as the snow was starting to get me wet. I stood at the door a minute and glanced over to see if I could see what bird was on the deck floor and notice the squirrel sitting there by the birdbath.  S/he was starting to get covered with snow just sitting there. Couple of more pictures taken and then I saw a sparrow on the 2 x 6 just in front of the squirrel. I couldn't really tell what it was, for sure. I came in the house and went to a different window that gave me a better side view. Sure enough, it is the White-throated Sparrow. The yellow is much brighter in the summer, unless it was just wet.

I enjoyed my little sighting. 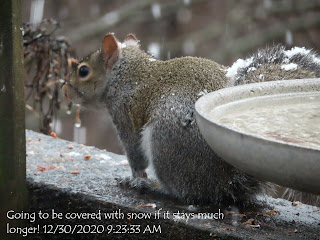