I Have a Green Thumb Alright, For Weeds!

July 10, 2020
I decided to go across the river to the garden plot. I should have stayed home, but then I would have lost everything I planted to the weeds the aliens put in my garden plot.  They knew I wasn't able to work hard in it this year, and so took advantage of that fact.  There was sedge and Johnson grass, the wild purslane, many other weeds I don't know names for and the five foot tall lamb's quarter. Okay, kidding on the height, was about 3 foot tall. Good grief, I could barely see the tomatoes. I could see the corn, only because the weeds are still shorter then the corn. I couldn't see the green beans at all.
I started in, just taking a random point and started ripping out the weeds. I looked around and decided that wouldn't be in my best interests.  I moved down by the corn and started weeding around the stalks.
A couple came in to work in their garden across the road. The elderly gentleman used to work on a farm.  I asked him what he thought of me weeding all that corn.  "Well, the corn's still taller than the weeds, so I wouldn't do anything."  I love that man!
I checked the green beans and found the plants. I swear the variety was supposed to be a bush bean but they had vines and they were traveling all over. I decided not to bother them.
I moved over to the most important crop, the tomatoes.  I eventually got most of the weeds out from around the tomatoes. I put stakes in and realized I could use two more. I clipped the bottom leaves off that were touching the ground. I have been watching a lot of the homesteaders like Lumnah Acres, Living Traditions, Weed 'em and Reap and Roots and Refuge Farm.
I really didn't think I was going to make it! Thought I was going to have to give it up and finish another day! I groaned and moaned and stood up slowly and moved and bent over and did it all again. I finished the tomatoes.
I gave the potatoes and the squash plants a cursory glance! Didn't have the energy to do anything to them anyway.
My green thumb worked on weeds, some I have no clue what they are. 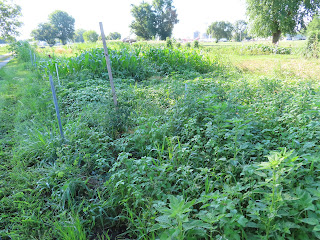 if you look you can see the post for one tomato and the corn at the far end. 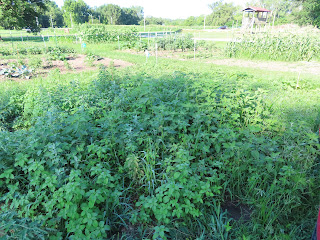 Can't even see the potatoes 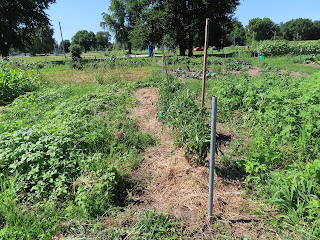 After the work you can see the tomatoes. The green area to the left is all weeds except the one row of beans 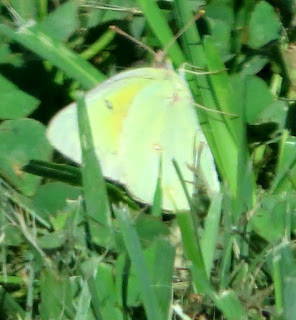