Outwitted by the Raccoon

June 18, 2020
I guess it's time to throw in the towel. A raccoon has beaten hubby and me!
Because the critter hasn't eaten the tuna, which, by the way, has always worked in the past, we decided to put some nuts in the can and put them in the trap.
I wasn't able to get a picture as husband "fixed" things before I got up. He has been getting up at 5:30 a.m. I was up at 5:40 a.m. He could have waited just a few minutes or even an hour for me to snap a picture.
The critter, which we believe is a raccoon, must be huge.  He dumped the trap up on it's side, spilling the nuts. Moved the trap around and ate all the nuts! Such a brilliant critter.  He has us beat! I am going to have one more attempt. I am going to research to see what other bait I can use. If anyone has an idea, please leave a comment! 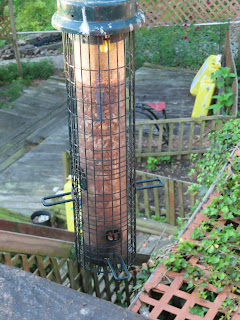 I refuse to leave this feeder outside at night
until the raccoon is captured and moved on his or her way! They broke this one earlier and I sure don't want that to happen again. This is the squirrel buster feeder that actually works against squirrels but not the cagey raccoon!!!
critters yard