Latest Battle of the Raccoon

June 17, 2020
We captured and removed a raccoon about a week ago now!  We realized right away there was still another out there. I have a squirrel buster feeder that, surprisingly, works and the squirrels may get a nut or two from the bottom, or I have seen them bounce on it and get one, but they can't get much more. They get upset and leave the feeder alone.  They have been concentrating on my brand new sunflower seed feeder. I have a little 4 inch pot that I fill up 10 times to fill the feeder.  The squirrels empty it in a day. What has that got to do with the raccoon?  Well, raccoons have hands. They figured a way to get the nuts out of that squirrel buster.  Probably leaning over and bringing to them and helping themselves.  The feeder would be empty of nuts every morning.  Besides, the raccoon washed in the bird bath. It was totally filthy in the morning. Plus, the raccoon doesn't care for the water wiggler and dumps it out of the way. Broke two now, and they aren't exactly cheap. This third one, so far, has landed on the 2 x 6 railing and stayed there, or in the flower pot below the bird bath. The wiggler has come off twice. Found it once, not the second time,  but we had a spare. This morning the water wigler was in the flower pot.
We have always put out a can of tuna. It worked really well. The last few days,  hubby decided the raccoon didn't need the full can and put just a portion in it. Nope, the raccoon is having none of it. We still are taking the nuts in every night. The raccoon washes, gets rid of the water wiggler and moves on his way. The other possible items, the raccoon could possibly be interested in, is the suet and the seed block. However, due to the squirrel problem, they are the hot variety of both. Laced with hot pepper stuff.
Last night, because we hadn't caught the raccoon in the trap, hubby moved it to the top of the steps.
Imagine, if you will, you are a raccoon, walking up the steps, seeing the trap with the 1/2 can of tuna. Pushing it aside, coming up on the deck, moving the trap out of the way. Looking for nuts but doesn't see any. Decides to wash his hands from touching that awful trap. Dislikes the wiggler thingy in his way. Dumps it into the flower pot. Checks out all the other containers and leaves the area!
Hubby gets up in the morning. Checks to see if a raccoon was in the trap. He later asks me if I moved it! I told him nope, it was sitting right in front of the steps when I went to pull the nut feeder into the house.
I still say, we need to go back to the full can of tuna or heck, put some of the nuts in there. Maybe that would work! 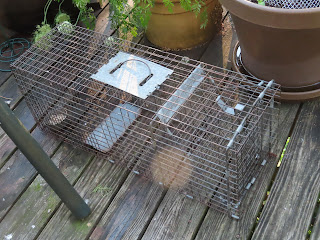