I Really Am Trying to Garden

June 21, 2020
I have a garden, which I call the river gardens.  I rent two plots which gives me a garden of 25 x 50.  Because of an injury, I haven't been able to do a lot. With help, I have some corn and green beans planted. The old bean seeds I planted never came up.  I planted tomatoes, parsley and squash.  One squash is the Pink Banana Squash.  Can't wait to see the fruit and taste it.  I also threw in some potatoes. They have sprouted now so, maybe, just maybe, we might see a small crop.  I have never put out the cucumbers for pickles.
At home, I have a few tomato plants, two, I think, I might move over the the river garden. I also have most of the peppers planted at home.  Many different varieties.
I even had old seed of some Peaches and Cream corn. I caught the squirrels digging in there so, I only saw 3 sprouts. I replanted again with the Kandy Korn. It rained so maybe the squirrels haven't got to it yet. Hopefully, I will have those three little rows sprout.
I found three wax bean plants at Westlake's and decided to plant them.  They must have had a bloom on them because the other day I picked a couple of beans. Only one was worthy of a picture.
My peas. Yes, I even grew some peas, hoping they would climb the chain link fence.  Some of the peas didn't sprout. The plants are starting to turn yellow, which I think it's getting to hot for them. I did manage to get one good handful of peas. They are so good eating them right from the vine.
I have house plants, which I never took outside and I don't believe I will now. Getting hot and really don't want to mess with the white flies and other bugs I usually bring back in the house when it's time to move them back in.  I did get the grapefruit trees re-potted and moved outside.
A friend of mine sent me some Meyer Lemon seed. They sprouted but I couldn't get them to grow.  I used a couple of the lemons in a wonderful bread recipe. The other lemon, I forgot about. It was in the box, in the back room, all by itself.  One day, as I was searching for something else, I saw the box and looked inside. There, all by itself was a lonely dried up lemon. The outer rind of the lemon was hard. Hmm, I wonder what the inside is like. I took a knife and cut the lemon in half. No juice but there were seeds.  I looked up at my very large indoor corn plant in front of me that just happen to have a vacant spot in the soil.  I took that half of lemon and put it in the soil and covered it up and forgot about it.
Yesterday, I was watering the plants and saw all these things sprouting in the pot with the corn plant. It dawned on me as to what they were. Sure enough, there are several little lemon trees growing.  Now, I have to find a pot with some good soil and transfer those trees.  Maybe this time they will keep growing. Can't wait to tell my friend what happened. I forgot, until just now, I do have a lemon tree growing in another pot. Put some seed in with this cactus plant that wasn't doing well. That tree is about 4 inches tall. Guess the secret is, plant it, forget about it, water the other things in the pot on occasion, and you might get a surprise some day! 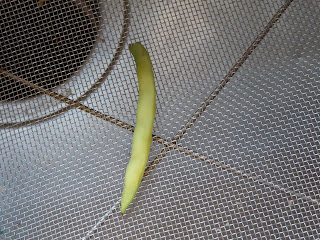