The Raccoon is Back

May 30, 2020
I bring in the nut feeder now, every single night. The first time, the raccoon tried to get in the locked can full of nuts. He hasn't messed with the can since then but he has come on the deck and searched around.  You are probably asking, "How do I know for sure?". Some things you just "know".
Last night, right about 10 p.m., I went into the kitchen. I decided to take in the nuts. Husband did it for a couple of nights but then he didn't do it again so, my job again! I looked out the window of the door and turned on the light! I was so shocked, and surprised, to see a raccoon take off at that time of night!  Never had been up there that early. He quickly waddled down the steps out into the dark where I couldn't see him any longer.
I went out on the deck, checked things out and grabbed the feeder with the nuts and back in the house I went.  There isn't any other food out on the deck. The Grackles ate all of the suet I put out that morning. The Downy had a little bit of it. Oh, the Blue Jays were out there too. They had some of the suet and the nuts.  I quit putting out the other suet and the feeder I used for sunflower has a chewed on cable. The squirrels did that. I bought another feeder but it hasn't been fixed by Birds-I-View, yet.
Fast forward to this morning.  I know the nuts are okay as the feeder is sitting on the floor in the kitchen.  I grab it and open the door! The very first thing I noticed was the planter at the end of the deck hanging almost off. These are the planters that fit over a 2 x 4. The only time I have had a problem is when the raccoon grabs on and pulls himself up. That is the only thing I can see happening!  If he walked through it, the flowers would have been mangled like the lettuce just below in the pot on the deck.
Oh, woe is me!  That is my gardening mantra again!  I have a trail camera sitting out there. Have to learn how to focus it in and turn it on! Just so I can be sure it is a raccoon! Then my bad feelings for the raccoon can be justified! 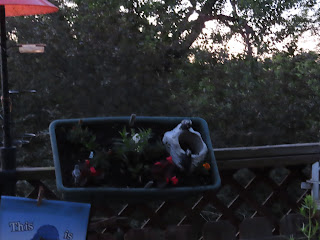 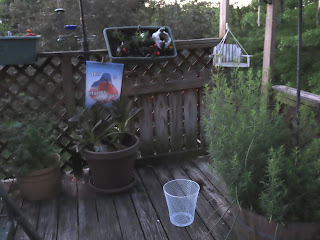