May 26, 2020
I have been bird watching since I was a kid, so, I am going to say at least 65 years.  My first real "find" was at Torch Lake in Michigan. Our neighbors had a cottage up there and invited our family. Mom and I took off down the road with a pair of binoculars. We heard a song. Quite a lovely song. We searched and searched and finally at the top of one of the tallest trees was an Indigo Bunting.  I was hooked for life.
Life happened, school, trip to California, marriage, children, moving to Missouri. In all of this, I still held on to looking at birds. Not birding trips, but seeing the occasional, "I wonder what that bird was?", and then looking it up.
In the 1970's sometime, hubby and I purchased 16 acres of land in Osage County, Missouri.  I think the first remarkable bird I saw was the Summer Tanager.  I found it from the song.
We lived over on East Miller, in Jefferson City, MO.  One of my thrills for there was hearing this lovely song and searching and finding the White-crowned Sparrow.
Many years ago we moved to the house we are still in now. I believe it was the year 1990. Looking out my kitchen window, setting up the bird feeders, was one of the best parts of the house.  I saw an Indigo Bunting, I got to see Cedar Waxwings as they migrated through, along with Baltimore Orioles and Rose-breasted Grosbeaks. I learned the song of the White-throated Sparrow.
I was able to see most of the Woodpeckers that frequented the Central Missouri area.
I had seen several Red-headed Woodpeckers but not at my home. Then one year I happened to see one in the Cottonwood out back.  Another year I had put up a seed cake in the shape of a bell, the Red-headed Woodpecker showed up again. Just one sighting never anymore then once a year.  In 2019 I saw him one time again.
It is now May of 2020. I noticed a Red-headed Woodpecker at my feeder. Attempted to get a picture but couldn't grab the camera fast enough. I figured my one time visual for the year was over.  It wasn't! I just got home and was going to get some lunch and looked out my window and there was the Red-headed Woodpecker.  Husband said he saw him earlier.  I wonder if there is a pair and they are nesting in the area. I know, two sightings but more then I ever have had at this house since 1990. 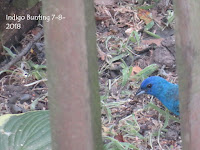