Showing posts from November, 2019
Show all

The Cardinal, The Head and The Dip Net 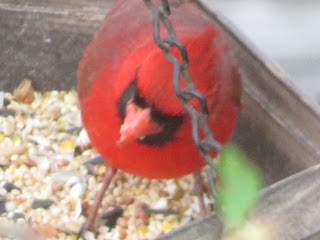 A few minutes ago I posted on Facebook that it was sleeting. Hubby decided to go see if we had mail. He opened the front door and a male Cardinal was in the lattice by the door and flew in. I heard this "cheep" and thought, "that sounds like a Cardinal". Yep, he flew in and landed on every surface in my computer room. He landed on the Chief's stuff. Not the Cardinals things. I was attempting to catch him with a towel, which didn't work as he flew high and I am not that tall. Jim went and got the dip net. I chased him around, would have the net over him, he would "duck down" and go underneath, and find the next spot to land. Jim was standing at the door. I wish I would have had the time to grab a camera but I was trying to get the bird outside. He flew and landed on Jim's head. So I put the dip net right over the top of bird and head. OMG, I am ROTFL, Talk about funny! I got a hold of the bird in the net. Jim got his head out and I walked
1 comment
Read more 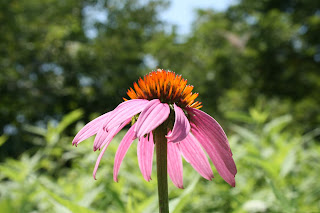 Yep, a whole month has gone by! The critters are still around but not bugging me much because I decreased all the seed on the deck and the suet is the hot stuff! I don't have many plants left now after the colder temps and snow!  Snow already!  On October 31st. The funny part of the snow thing is, my birdbath froze over. I failed plugging it in. I went out and did that and put hot water in the birdbath so the wiggler would work.  Hubby turned off the outside water so I grabbed the teapot and filled the birdbath up. The sad thing is, the next day the birdbath was frozen over again. I didn't have the other end of the cord plugged into the birdbath! I bet you didn't know if you plugged something in you had to make sure the other end was attached to something also. It's all good now! I made sure there was some of the hot suet out for the birds and checked the one feeder, squirrels can't eat from, for seed. I didn't even pull up weeds and trim. I have been stitch
Post a Comment
Read more
More posts