Showing posts from October, 2019
Show all

I Never Know What's Going To Happen Next! 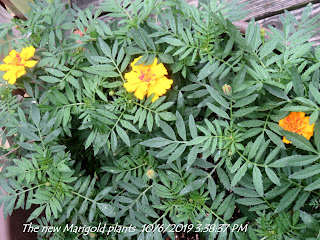 My Deck Flowers and Garden By Mary J Williams ©
This has not been a year For my plants to do good Either critters got them or something else could
It was a while back I went on the deck Noticed my Marigold It was dead by heck!
I heaved a great sigh And went on my way There wasn’t much to do And nothing to say!
About a month ago, In another pot, There were some baby plants Weeds they were not
Little tiny Marigolds Were starting to grow A smile lit my face Those I do know
I watered and nurtured Plants were growing strong I also found some more Hoped nothing would go wrong
Cantaloupe seed was thrown out In another big barrel I thought maybe the birds Would eat if they weren’t sterile
Low and behold Three little sprouts Were looking at me I wasn’t pulling them out
Now all are blooming The temperatures are dropping I have flowers on the Marigolds But bet there will be no cropping
Been fun to watch At least something to enjoy I even got a few peppers And a few tomatoes, oh boy.
Here are s…
Post a Comment
Read more
More posts