July 10, 2019
I told hubby, "you better set the live trap. I think we have a raccoon on the deck again."  Hubby's response, "Okay".  Later that evening he told me he had set the trap.
This morning, I let the dogs out without thinking about the trap out there!  Well, it was empty anyway! I looked and the tuna can wasn't in there. I looked around and there was the empty can laying on the deck! I thought "smart raccoon!  Actually, I was to find out this raccoon was pretty darn greedy and dumb!  I saw the raccoon had been in my birdbath as it was filthy dirty and the water wiggler was upside down with a part missing. My dog goes over to the Bar-B-Que and the cover on it starts moving.  Oh crap! That raccoon is still here!  I get the dogs inside and tell hubby the raccoon is under the cover.  We, being intelligent humans, decide to scare the critter off with water.  We spray her and, gee, all she does is get wet!  Okay, on to plan two. While Hubby figures out what to do, I grabbed my camera. I took a picture of the body of the raccoon. Hubby took the grate and stuff out and there was that greedy little girl!  Her head was through the hole at the bottom of the grill! Hubby goes and gets a pair of large heavy gloves.  He pushes and pulls to no avail.  I being so much better at this kind of thing, pushed and pulled too. Nope, raccoon's head is not coming out!  Hubby goes gets a hammer and a type of chisel, looked like a railroad tie nail.  He tried to enlarge the hole. Nope, didn't do much good but put a couple of holes in the bottom of the grill. Yes, I tried too! After all, I have the gentler touch!  Nope I didn't get it done either.
Frustrated! That's what I am at this point.  We both stood back and looked and wondered what was going to happen and the prospects for the life of the raccoon was not looking good!
Wait!  I have an idea!  Turn that grill upside down.  We did. There is a screwed on plate at the bottom of the grill. No wonder the hole wasn't enlarging, the plate was there. Hmm, two screws.  Hubby says, "I'll go get a screwdriver and undo the plate."  "Nope", I tell him. "All that will do will take the plate off and it will be hung around the raccoons neck and we will never get it off!"  Okay, give me the gloves again!  I get the gloves and I went to work. Gently pulling and pulling and pulling!  Hubby says,,,,, "I think you almost got it!"  Next thing I know, POP! The raccoon was free!  Could she walk? Was she able to leave?  There she goes, down the steps!  To the back fence, through the fence around the hosta, up the fence and then the lattice, over the top, down the other side, and off to the wooded area.  If you wonder how I know its a girl, remember, I was up close and personal!
I only can say, "she better not come back!"
I am drained! Emotionally, physically and exhausted!  Hubby just came in and said, "Can you please start tomorrow better!" 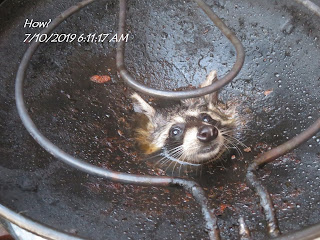