Showing posts from July, 2019
Show all

My Rhyming Mind in the Shower

July 31, 2019
My Rhyming Mind in the Shower By Mary J Williams © I am so exhausted And writing poems in my head But was standing in the shower So, I didn’t have any lead. No pencil to write with Soap would go down the drain Alexa was in the other room No recording, Echo’s not to blame One of the thoughts Was about my older brother Was he saving any money, Since the passing of our mother? I looked out the window Saw a few birds flying by Looked at the neighbor’s flowers They look so pretty, “sigh”! Then I thought about How fast the year is passing It’s the end of July And the cold weather is amassing I don’t like the cold I want the warm instead I can go work the garden And pick some flower heads. My other brother takes off for Florida So, he can golf and fish I would really like to visit If all goes well, I wish Then maybe go visit Laurie At the lake in South Carolina I could maybe see an Osprey But it might as well
Post a Comment
Read more 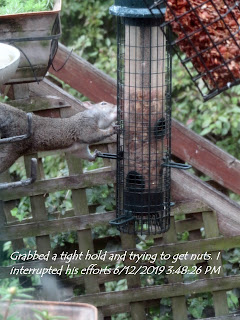 Therapy in Poems By Mary J Williams © I am crying this morning Because what do I see Not a single bird Is visiting me. The feeders are empty So, the critters stay away But that means the birds Will also make hay Put up with the critters? Let them tear up my stuff? All my hard work Gee, that would be tough I want my tomatoes And my peppers too Those critters destroy They do, they do, they do! How long can I hold out? Are my other words I’m sure it won’t be long Before I feed my birds Then the critters come back and tear stuff up on the deck I will get ticked off And I will be totally upset My brother says poison them I don’t think I could And I know you, my friends, Don’t think I would Ah, this is hard I know what is right Put the bird food out And the critters win the fight I forgot about the “Critter Ridder” I must give it a try At least keep Raccoons away So, I can tell them bye, bye! Th
1 comment
Read more 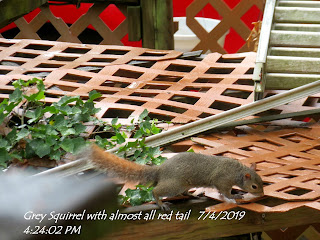 I am sorry! I get up, make coffee, go out on the deck and see the water-wiggler in the birdbath pushed aside.  I went over and looked at the one tomato plant. No tomatoes at all, not even a baby one. I looked down and see a partially eaten pepper.  One tiny little pepper was left on my pepper plant and now it's gone.  Then my mind starts rhyming just like singing a song!  So, here is the poem from this mornings dealings. Read it aloud with lots and lots of feelings.
Post a Comment
Read more

The Excitement of Growing your Own Produce is Gone- Sort-of! 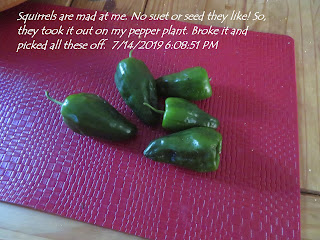 You know the anticipation you have when you grow your own produce to eat!  You weed and take care of the plants and watch for the blooms and then you start to see the fruit. It's just a really magical time. Then when the tomato or pepper or whatever you are growing, is just days away from harvest, you go to the plant and realize the produce is gone! In utter disbelief, you look around. Can't see a thing, it's too dark yet! Morning hasn't quite crept over the horizon. Finally, it's light out and you go and check again. Just maybe you missed it.  Nope, the beautiful tomatoes are gone. Oh, and a large pepper too! Another scan of the yard and I found what I thought was one of the tomatoes and then on the lattice over the patio area, another one.  Went to get my camera! The one laying in the yard over the fence was not a tomato, it was the pepper. The one on the lattice was the tomato. Couldn't see the other tomato. Following the suggestion of our Wildlife Cons
Post a Comment
Read more

July 22, 2019
Last night, when I let the dogs out, I realized it was raining.  I was really happy to see the rain. It, hopefully meant, I wouldn't have to water tomorrow. I am sitting at my computer and for some reason, I thought about the raccoon that has been around again. It's like ten o'clock at night.  I get up and go to the back door and whip on the light on the deck. Those critters sure can run fast! Off the bird feeder and down on the deck, down the steps and gone!  My "Squirrel Buster", yes, that's what it is called, was twirling round and round.  That raccoon was trying to get the nuts. I interrupted him! Good for me!  I went back to my computer and was chatting to some friends, when nature called.  It was maybe forty-five minutes later!  I went into the bathroom and sat down on the pot, which is a good thing as there was the brightest lightening and then the loudest clap of thunder I have ever heard.  Good thing I was where I was, at the time!  When I got up I
Post a Comment
Read more

Time To Cook, Freeze, Dry and Can 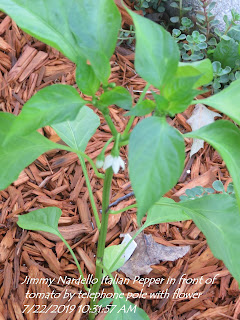 Started my blog and it looked like a bunch of whining so I deleted it.  Everyone has problems maybe not with critters and falling down but other things.   I love to cook and made the best zucchini bread out of the zucchini from a friend as I didn't grow any. Lemon Blueberry Zucchini Bread with Lemon Glaze! I was looking at my re-potted, chewed up peppers and they appear to be doing okay.  The ones I planted out in the front are doing well. They even have flowers on them.   My critters now include a toad I believe.  Went to water and this little guy jumped out of the container the hose is in. I found him in the old excavation of the chipmunk. I had plugged that hole and that little critter unplugged it. LOL!  Wonder if I can make a word. Carts (Chipmunks and Raccoons, Toads,Squirrels. LOL! I have Carts!   Made pickle relish and blanched corn and froze it besides the bread. Shredded and sliced the other zucchini and froze that too.  No tomatoes yet. I do have a c
Post a Comment
Read more

I told hubby, "you better set the live trap. I think we have a raccoon on the deck again."  Hubby's response, "Okay".  Later that evening he told me he had set the trap. This morning, I let the dogs out without thinking about the trap out there!  Well, it was empty anyway! I looked and the tuna can wasn't in there. I looked around and there was the empty can laying on the deck! I thought "smart raccoon!  Actually, I was to find out this raccoon was pretty darn greedy and dumb!  I saw the raccoon had been in my birdbath as it was filthy dirty and the water wiggler was upside down with a part missing. My dog goes over to the Bar-B-Que and the cover on it starts moving.  Oh crap! That raccoon is still here!  I get the dogs inside and tell hubby the raccoon is under the cover.  We, being intelligent humans, decide to scare the critter off with water.  We spray her and, gee, all she does is get wet!  Okay, on to plan two. While Hubby figures out what to do,
1 comment
Read more

Two Hours Out There and I Can't Do Anymore 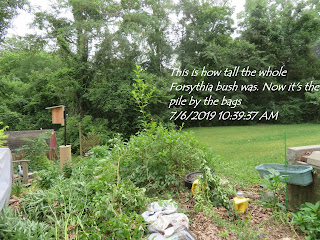 All I wanted to do was plant my 5 peppers that I started from seed.  It's getting late in the season and I really want to try these.  Got the seed from Baker Creek Heirloom Seeds. One of the plants is Lemon Spice Jalapeno. I can't wait to see if it actually has a lemon flavor to it. The other is a Red Marconi. A long tapering sweet pepper. I want to see how they compare to a Bell Pepper.  I also have Jimmy Nardello Italian Pepper. Also supposed to be sweet, long and tapering. If you believe the reviews this pepper is the best!  Hopefully mine will grow and bare fruit. After doing those large weed, cutting back the Forsythia a,d digging out more weeds, planting the 5 peppers, I am hardly able to walk. I would take a selfie but I am afraid I would scare you all to death! Notice the on tall piece, The whole bush was like that. See the pile laying on the ground by the white bags? That's mostly the Forsythia. It does have the aggressive plant in it A root I couldn
Post a Comment
Read more 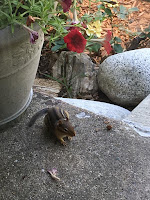 Oops! It's not Christmas! It's July 4th! No wonder I got so hot while baking! Here is how it happened.  I am going through my mom's stuff that I brought home and stashed in there was a recipe "Grandma's Sugar Cookies".  Now, I have no clue which Grandma. The writing is my mom's but the paper is very old and water stained but I could still read it. I decided to make the cookies thinking I could give the recipe to my Granddaughter, that lives near me. I gave her some cookie cutters. I started the cookies, making them by hand, no electric mixer or anything, just my trusty wooden spoon!  I reached in the refrigerator for sour cream and it was not a healthy color, more blue than white.  I called my neighbor and, thankfully, she had sour cream and brought me some.  She had a conversation with Rosebud, my dog, and with me, grabbed a book to read and left. Just as she was leaving she noticed a visitor on my porch. I went and got my phone and snapped a pict
Post a Comment
Read more
More posts