Why Do I Do This To Myself??

May 30, 2019
First of all I was up at 3 a.m. and couldn't get back to sleep.  It was around 3:30 when I finally gave up and No, it wasn't Chief's fault.  I have so many things I want done and I kept thinking about them and how I was going to be able to do them and how should I do them. I had the coffee going by 5 a.m.  Hate to start it too early!  I was on the computer playing a game, checking email and all that stuff.  Then I decided I was hungry. There were two pieces of bacon left so I zapped them and grabbed some peanut butter crackers. I had a cup of coffee, ate and then headed out. Downstairs I put a load of wash in. Out the backdoor and got the lawn mower and pushed it towards the gate. Was just getting the gas, when a mouse ran out from under it.  Not a good place for a home!. Then up to the front and mowed.  Got the front and part of the side done.

I had started my project in the front of the house. There was an area there I was going to put down that rubber mulch and move my bench over and put in some shade plants. Just a list of things.  Thought I was going to do it last year but all the other things in life wouldn't let me get it done/

After this spring there were hundreds of maple trees growing in that spot. So, I got my pallet and my little shovel and sat and started getting those weeds out.

Yesterday, after cutting all that stuff off the lattice (by the way it fell and is leaning up against the shed), I started trimming out the Forsythia. It was way out of hand.  I ended up asking Hubby if he could take the chain saw and cut them back.  He was going to level them and I said "NO" cut back about 16 inches. So that's what he did.  I chopped up two bags full of the limbs and took them down to the pile. I just couldn't do another.  Last night I called my granddaughters and they came up today and helped.   They got all the limbs from the bushes and all the stuff that I pulled off the lattice.

While they moved that stuff, I worked on the front. I filled the bag and the girls came up and took it down and emptied it!  One more thing I didn't have to do!

I ate some lunch. Working like this gives one an appetite!  Rested a bit then back out finished weeding, leveled it out put down the ground cloth, and then started opening up the rubber mulch.

I couldn't finish!  I dug up bulbs and replanted them. I took up leaves but just couldn't do anymore. I thought!

Brought all the tools in. Took care of the wheelbarrow. Was coming in to sit when I remembered I had laundry in the washer.  Opened up the dryer and forgot that I did some towels yesterday so, folded clothes first . 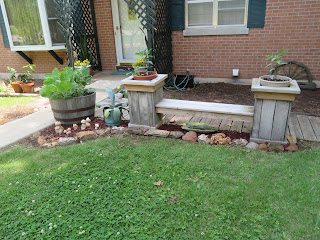 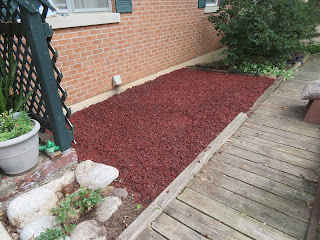 This is what the area looked like after I weeded
it all out last year.

This is weeding out, again, and laying cloth and rubber mulch down.

I will put the seat planter up against
the house and put some shade annuals
in them. 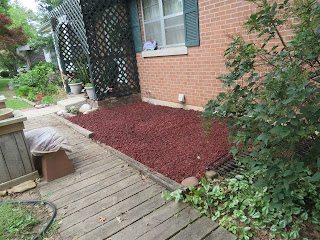