I Am Overwhelmed With What I Have To Do

May 17, 2019
First, I couldn't go in the garden or basically do anything outside. Cold, windy and rain and more rain. We had over 7 inches of rain at my house in the first 3 months of the year! The cold damp weather continued into April with another 5 inches of rain. I finally did get in the garden and planted those potatoes and the green beans, which are coming up. Since then I haven't been in the garden. I bought tomatoes and peppers and some herbs at the plant sale. They were all piled up in the garage. Finally I took them outside. The temps went down to 44°F. Not good for tomatoes, herbs and peppers.


I looked around my yard and saw all the things that needed to be done. It was totally overwhelming.  Hubby, who is still having lots of issues with his legs, went out and got on the riding mower and did the flat area in the far back. I figured I had better get busy before he attempted more. So, I did the dog area then mowed the front. Got the trimmer and trimmed the dog area, down the fence line up to the front and got quite a bit done there before the battery died.


Today, I pulled up my lettuce washed it and saved some for the neighbor across the street and some for myself.  Planted 3 peppers in the carrot box. Tried carrots several times and never got any. On to something else, thought peppers would work.  The other box I put in a basil, a Rutgers tomato, and summer savory.  Was cleaning up some of the mess of the leaves in the butterfly area.   Hmm, put a tomato in there, called Abraham Lincoln.  Then I threw in a Merlot pepper too.  Decided I would plant at least one tomato on the deck and a couple of peppers. If the squirrel starts his stuff, I will have to pull them up and take them over to the garden plots, I guess!  Thought about what to do next.  By this time I was already worn out.  Grabbed some lunch and went outside walked down to the pond and put water in the one birdbath. Took the other down. It needed cleaning. Speaking of cleaning. The pond pumps weren't running well, so I decided to clean them. Did you know that when I sit down it's pretty darn hard to get back up! I was sitting on the rock edge finally got the filters cleaned and the other parts put it back together, down on my knees to plug it in and ....nothing. Didn't work. Took it all back apart rewashed the filters put it all back together.......Nothing.  Slowly walked up to the house!  Told hubby, he said he would go look.  I was back out 5 minutes later and he was cleaning the other pump and the first one was working. "What did you do?" I said. Put it together and plugged it in he said.  Okay, then!  He cleaned the other and now the 2 fish we have left of 5 are breathing better for now.  I picked up a bunch of branches from the tree and some stuff I had pulled earlier put them in my refuse bag and hauled them down to the pile. Back up to the house finally. Folded clothes, as I did a load of laundry in the morning.  Went upstairs and asked Hubby if he would go after our dinner. We usually eat out on Friday night.  So it was Culvers,  Love their salad. Was going to take a shower but neighbor called. Going across the river to the garden plots. Got a total of 8 tomatoes planted, a couple of basil, transplanted some marigolds that came up from last year and planted 6 peppers.  I would call this a full day of work!!! 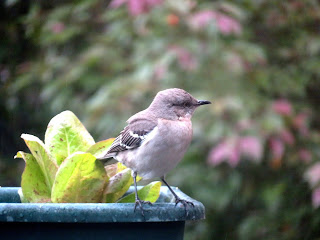 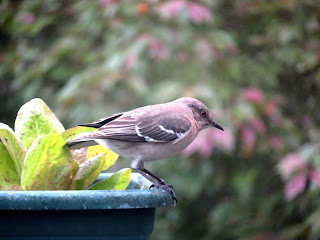 Yep it was my friendly Mocking Bird.