I checked on the garden on the 6th and found that very few of the beans came up. The weeds were growing with vigor as were the volunteer sunflowers.  The sunflowers were everywhere.
My first order of business was to take several of the sunflowers and transplanted them on the back 25 foot.  Then I started to till with the small tiller.
I couldn't get the blasted thing started and was going to start hoeing.  Finally gave the tiller one more chance. Yippee!  It started.  There were so many rock and other stuff like the old corn stalks. I was doing some pitching into a pile, putting rocks in the road and pulling up the rest of the large weeds to put in the pile.  I saw some marigolds that came up volunteer also. Transplanted them too. 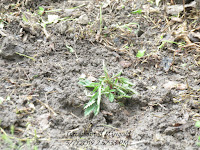 Yep, that's a wilted marigold.  I watered later so I think it will make it.

After tilling, I planted two rows of potatoes. One row of Yukon Gold and one row of one of the red types.

After the potatoes, I finished off tilling the whole garden, avoiding the chives and one clump of dill and what I think are to potato plants.
I planted the new green bean seeds then.  I had stopped at MFA to purchase them before coming to the garden.
The rows of green beans with a marigold transplanted at the ends of the rows.  Had to put them somewhere. LOL! 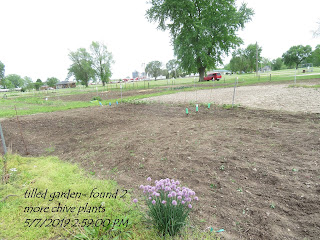 This is the tilled garden. That is the largest clump of chives.  There are two smaller ones.

And here is the exhausted person. Gardening has begun! 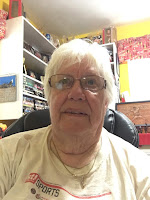