Playing in the Snow!

January 17, 2019
It's really a long story!  I had to get up to use the bathroom this morning about 3:15 a.m. Well, my darling, Chief, decided it would be a good time to go outside also. I let the 3 dogs out the door.  I figured they wouldn't be out long. Boy, was I wrong.  Lacy came in right away.  Chief about 15 minutes later. Rosebud, would not come in. I walked out on the deck and there she was at the bottom of the steps.  She wouldn't budge! Would not come up the steps!  I walked in the house and went back to the computer and waited. I heard her bark finally, so went to let her in. Nope, she wasn't at the back door on the deck. In fact, I didn't see her at all!  I finally gave up and went downstairs and went to the back door in the garage.  There she was, waiting for me to show up!  The only thing I can figure is she doesn't like climbing the steps through the snow path.  Okay, I finally went back to bed. It's about 5 o'clock in the morning now.  I think I just got to sleep when I heard that bark. Chief, at the door, bark, bark. Wanting outside!  I got up, again, and let all 3 of them outside.  Now this is normally treat time. Guess who made it back up the steps this time. Yep, it was Rosebud.  I told her no treats now. I went back to bed.  I was planning on going to a painting class today.  I got up, just before 8 a.m.  Yes, let the dogs back outside.  No, Rosebud did not climb the steps.  The other two came in and I gave them their treats.  I finally went to the garage door and let Rosebud it.  I decided, before going to paint, I better clean off the steps. I grabbed the shovel and set to work.  That snow is so heavy.  Finally got the steps cleared but the muscles in my arms are shaking. Back didn't feel the best either.  Okay no painting class.  I notified my teacher and grabbed my coffee and sat in front of the computer, which lasted about 5 minutes.  Hubby went to the store!  I figured I was hurting anyway so I might as well finish vacuuming. I didn't finish it yesterday!  I was in the kitchen, looking out my favorite window and realized the birds had finished off the mixed nuts.  I went out on the deck and grabbed the feeder and filled it up.  The other feeder I put nuts in was empty too!  Problem, lots of snow on the deck, Don't have on my boots, just my tennis shoes.  I went over a grabbed a big handful of snow and put it in the flower pot. I kept doing this and looked and thought, I could make a snowman.  I kept piling on the snow.  I needed some arms. Looked around and saw the smaller pepper stakes. Nope, still too big. Ah, there is the Poinsettia I removed from the house. Broke off the prettier tops and put them in for arms.  Eyes, I needed eyes. I know, a piece of stalk broken and there are the eyes. Nose, what to use for the nose. No little stones around, not that I can see anyway. I see a small oak leaf and roll it up and stick it in. There is the nose.  Need something on the head.  Ivy is right there.  No problem!  Broke off some leaves and started pushing them in and almost lost my head!  I laid them on top and covered the stem part with snow and that worked.  Ivy for the buttons too! Now I have a Potted Plant Snow Person on my deck!!! 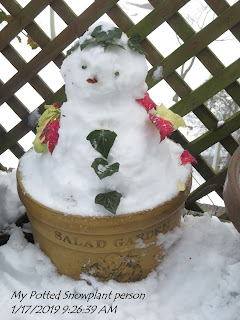