November 05, 2018
There is absolutely no comparison between a hawk and brussel sprouts unless you are me!

I noticed there were a few small brussel sprouts in the pot on my deck.  I have attempted to grow these for years and have never been able to.  Heat is one thing and bugs were the other. Not much rain for gardening this year but this one was on the deck, in it's on pot and it was watered.  The bugs, I broke down and used Sevin Dust!  I mostly gave up as the plant really wasn't growing.  Well, behind my back, evidently with the little rain in September, they proceeded to grow some.  I picked them on November 3, cooked them and ate them with my baked turkey.  They were actually quite good! Small, not enough of them, but good!

Then, today as I was getting ready to leave the house, I looked out my window and there was a lovely hawk on my deck. I thought it was a Cooper's Hawk but after posting a picture on the River Bluff Audubon Society Facebook page, I believe it is a Juvenile Sharp-Shinned Hawk.  He flew off after something and he didn't come back to roost again.

Then, after checking the time, I knew I spent more time with the bird pictures than I thought and had to boogie on down the road!

The first picture is the brussel sprouts cooking in butter. Yummy
The rest of the pictures are of the hawk thought to be a Juvenile Sharp-Shinned Hawk. 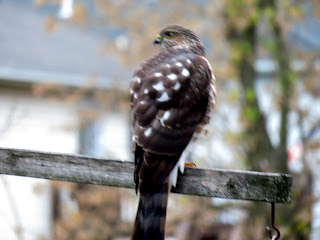 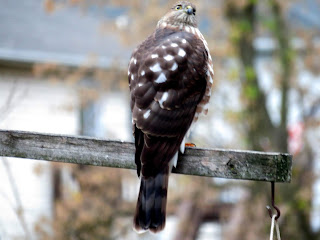