Showing posts from November, 2018
Show all

A Squirrel practicing Gymnastics for the Olympics. I think I have a Winner! 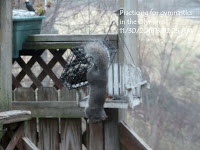 This morning I was watching the squirrels and I believe this one is trying out for Gymnastics in the Olympics.  The movements were very graceful and the tail was used, on occasion, for balance.  I took some pictures so I would be able to show this squirrel if he has improved through time!  I believe he is getting the "hang" of it. He left once and then came back for more exercise training. I believe it's like the high bar.  He then jumps to the side rail and back. Lovely moves!  He just has to be able to stick the landing a little better! Below are all the practice moves.  great move and he is getting the "hang" of it! Possible new one foot hold
Post a Comment
Read more 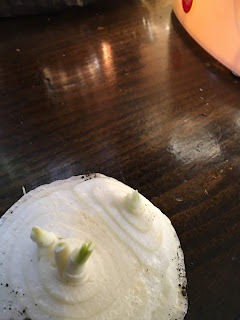 I went outside yesterday and ran my lawnmower over all the leaves in the front yard in attempts to mulch them some.  While I was outside, I filled a flower pot with some soil to put that onion in that I found growing in my refrigerator (see previous blog). I forgot about the pot until this morning. I picked it up and carried to the back room.  I put that onion in the middle of the rick-rack cactus, I went to pick it up and put it in the pot and it wouldn't move.  The onion had already rooted in.  I couldn't believe it. Look at the shoots in the picture. First one was on the 22nd and the second was was taken this morning on the 25th.  Guess I will just leave it in that pot and see what happens.  LOL! found on 11-22-2018  put in this pot on 11-22-2018 picture taken 11-25-2018
2 comments
Read more

Happy Thanksgiving and did I get a good laugh today 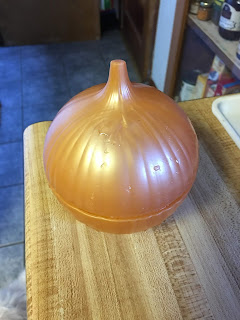 I am cooking and almost finished with dinner for myself and hubby and asked him if he wanted some green beans. "Sure", he said.  I proceeded to open a can of green beans and put a tablespoon of bacon grease in and reached for my onion container in the crisper.  I opened it up and started to laugh.  The onion had sprouted and had roots growing.  I would not have believed it if I hadn't seen it with my own eyes.  Now, I decided I would put it in some soil.  I have some rick-rack cactus growing and there was a center area and I plopped the onion down there.  I have not clue if it will continue to grow. Can only wait and see! I walked to the kitchen, still smiling and laughing.  Then it came to me, I really needed to document this.  I grabbed my phone and started doing the picture taking. First of the container, then I went in the back room and took the onion out of the soil.  I think you can still see the growth and the roots!  This was just too funny! The container was i
1 comment
Read more

My Yard is Awful and now we have SNOW! 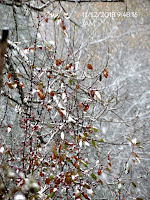 Due to personal problems, my yard was thrown to the various weeds.  It looks horrible and now I have tons of leaves to contend with, which are now buried in snow!!! This is only the 14th of November. Way to early for this white stuff on the ground.. Just to make matters worse, the temperatures are just plain frigid. This morning I got up to 13°F. This is not normal temps for Central Missouri in November.  With the temps that low, the snow is still on the ground covering all the leaves.  I may never get them blown off as they have to dry first.  I can be thankful that some of them had been removed in October by my Grandkids that were here for a short time.  I even got a lightweight new leaf blower run by batteries.  That means our household is the proud owner of three blowers.  Can you hear the laughter in my fingers as I type that, and see the grin on my face?  I do have a couple of pictures to share with you!  A couple of the snow and then the picture of the wonderful little visitor
Post a Comment
Read more 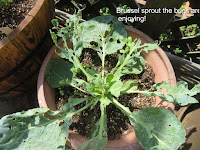 There is absolutely no comparison between a hawk and brussel sprouts unless you are me!  I noticed there were a few small brussel sprouts in the pot on my deck.  I have attempted to grow these for years and have never been able to.  Heat is one thing and bugs were the other. Not much rain for gardening this year but this one was on the deck, in it's on pot and it was watered.  The bugs, I broke down and used Sevin Dust!  I mostly gave up as the plant really wasn't growing.  Well, behind my back, evidently with the little rain in September, they proceeded to grow some.  I picked them on November 3, cooked them and ate them with my baked turkey.  They were actually quite good! Small, not enough of them, but good! Then, today as I was getting ready to leave the house, I looked out my window and there was a lovely hawk on my deck. I thought it was a Cooper's Hawk but after posting a picture on the River Bluff Audubon Society Facebook page, I believe it is a Juvenile Sharp-S
Post a Comment
Read more
More posts