Not a New Bird, One I Have Seen Before, But Not For Years

October 19, 2018
A lot going on on the personal level recently so no blogs.  The other day was out on the deck and thankfully I had my phone in my pocket.  I had just emptied the trash and came up the deck steps. I heard this bird call. It sounded somewhat familiar.  I looked around and saw a bird I hadn't seen in a few years at my feeders.  My first thought was "I don't have my camera". The second thought was "Oh, but I have my phone". I slowly removed the phone from my pocket and gently set the recycle basket down.  I took a picture and then another and another.  The bird flew away.  I looked and a couple pictures were not too bad.  This is the Red-breasted Nuthatch. They are smaller than the White-breasted Nuthatch and, you can tell by the name, has the rusty chest vs. the white.  The song of the Red-breasted is much prettier than the White also. In my opinion.

For those that don't know- here is a picture of the White-breasted Nuthatch. I just realized I need some better pictures of this frequent bird to my deck feeders! 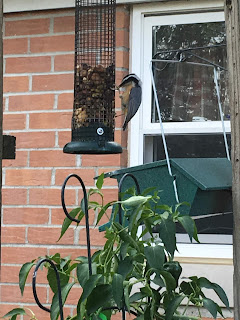