Who Needs To Work Out At A Gym When They Have Potatoes To Dig!!!

July 24, 2018
I had these ambitious visions of digging two rows of potatoes and digging up and taking off remaining ears from the corn and making corn stalk decorations.  Do you know how far I got? Barely had the energy to do the two rows of potatoes.  Now, you have to factor in that I am 74 1/2 years old and the temperature was in the 80's and climbing and the two rows were 25 feet each!  After 15 minutes or so, I had to go sit and drink some water. Then back at it! Another 20 minutes later, sit a spell and drink more water.  For once, I am glad I brought two bottles of water with me, instead of the one I normally bring! I pulled up the cauliflower and broccoli and weeded that area and piled all the weeds and potato vines all in a pile.  By the time I got finished I was dripping wet and totally exhausted!  The first row I dug was almost a full 5 gallon bucket. The second row, maybe 1/3 a bucket.  I told my gardening buddy, no more flowers so close to the potatoes.  Number one the flowers get large and the branches fall over.  Number two the branches shaded the potatoes. Besides being very difficult to dig the potatoes. The one end and the other end where the plants weren't shaded had some great potatoes. Where plants covered over by the zinnias and other flowers, plus some weeds, not many potatoes at all! There are blooms on the squash. Hopefully those will grow soon!
I was so exhausted I could barely move. I have been home two hours and I am not moving much better. This should count as a work out is all I can say!!!!
Because I enjoy them so much, had to take a picture of the butterfly. 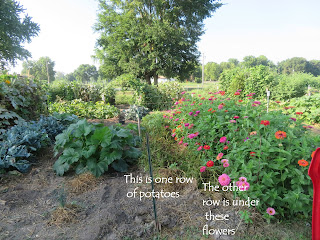 If you can't read on the picture, the one row is on the left just beyond that green post. The second row you can't see because the flowers are bending over the row and covering them up. 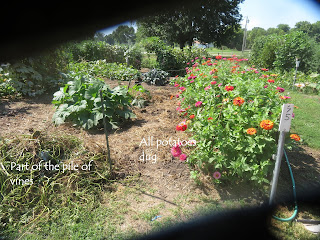 This is after I had my two hour, plus, workout. Notice the pile in the front. That's not all of the pile. Only a small portion of the vines and weeds and dug up stuff. 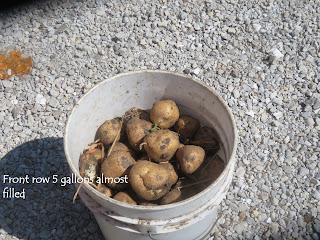 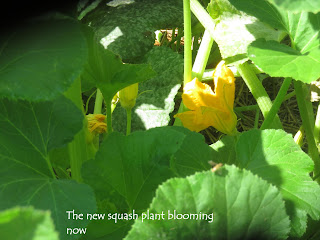 The new squash that was planted with the blooms!