Portrait time in the Gardens! Bee, flower, and Chippy!

July 11, 2018
I was watering and noticed a honeybee on my sunflower.  Put the hose down, took my camera out of my pocket and tried to get a picture.  Later I decided to take a picture of a planter on my front porch. It's a great example of flowers that tolerate all this heat. There are three Vinca's and one Angelonia. Off to water down the side where I planted cucumbers in the ground and in pots. Filled both of the birdbaths and grabbed the other hose to water down the back fence of the dog yard.  For the sake of the story, I am calling this chipmunk a "her" throughout. I caught a movement and laughed as a chipmunk took off from the bird feeder and ran down the top of the fence. She stopped, I guess to see what I was up to. I talked to her and asked for a couple of poses.  She listened to me chatter away for a few minutes while I took a couple of pictures then down the fence and diddy-bopped across the yard to the Crepe Myrtle. Under them she went.
I picked up the hose to continue watering when I noticed two or three more chipmunks. Tried to get a picture of one but missed the shot.  Oh well, I got pictures of the other one.
I picked up my hose to start watering again when I caught the movement out of the corner of my eye. There was a chipmunk in the Blackhaw, which is right by the platform bird feeder.  I got out my camera again and asked the Chippy if I could take a couple of pictures. By the time I got focused in, Chippy moved. I said where are you, where did you go? Then I looked up and to the left and on the V of the branch and trunk laid the Chippy. I told her to hold still while I took her picture. I zoomed in for the portrait one.  Chippy said that was enough and went down the trunk. I followed her progress and thought I was going to get a picture of her under the Hosta but it was not to be. She left there, went across the boardwalk and into the plants on the other side of the fence.
I asked her where she was going!  Chippy stopped and looked and listened, time for a couple more pictures. Then Chippy took off down the sidewalk and disappeared under the Burning Bush.
Watering, Pictures and Portrait time was over! 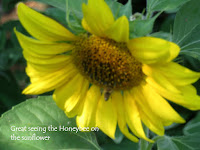 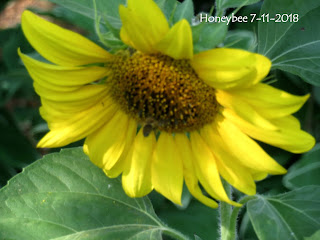 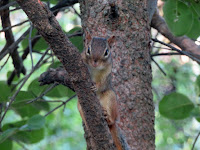 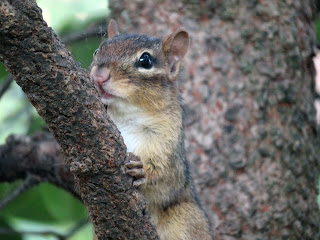