July 18, 2018
My neighbor called me on the phone. "There's a deer in your yard by the pine tree." "Oh, maybe drinking from your pond."  I dropped the phone, grabbed my camera and ran to the door. Then very, very quietly, I opened it up, tiptoed out on the deck and saw the doe. I couldn't get a decent shot through the branches of two trees and the fence. She saw me and moved off.  I saw a movement out of the corner of my eye and there, coming down from the bird feeder was a Chipmunk.  I guess they don't like the smell of mothballs on my deck!  I manged to get two pictures before he took off.  Then in flew a Blue Jay. They are usually in an out so quick I don't get good pictures but this time I got two.

Earlier, I was watering. Then the rain came so I went to turn off the water. On the handle was the strangest looking insect.  Black lacy wings, black body and the head had almost a brown tone to it.  I got a couple of pictures. Time for Google.  I found a fly! Yes, that's right a fly. Now I wasn't all that sure so I am a member of The Moth and Butterfly Identification Forum on Facebook.  I posted my insect and said not a moth or butterfly but what is it?  My Google ID was correct. It is a Tiger Bee Fly. Now in the fly form it is nothing more than a very large fly that drinks nectar. It doesn't bite, or sting, just uses his long proboscis to eat the nectar.  However, the larvae is a parasite. The female Tiger Bee Fly looks for the round holes of the Carpenter Bee. If there are eggs in the hole, she deposits her fertilized eggs in the hole. When the larvae hatch they eat all the live Carpenter Bee Larvae before they can mature enough to fly away.

Didn't know you were going to get a lesson on an insect, did you? 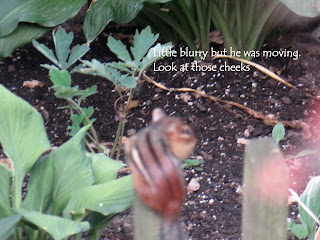 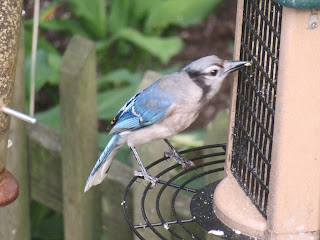 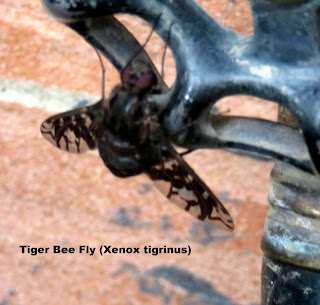 The description said probably got the name of Tiger due to the black stripes in the wings.