Critters and Bugs and the garden. What a day!

July 10, 2018
My morning started with watering what few plants I have left on the deck. Seeing as the squirrels ate off most of the leaves and were ripping off the green tomatoes, I gave it up and pulled them all. Oh, except for the experiment. If the squirrels leave it alone, we might see what happens to the plant they tore up.
I leaned over the side of the deck to water the Hardy Azaleas and caught the flash of movement! Aha, a chipmunk running from the water, to the neighbors.  I continued watering and I watched the chipmunk and he was watching me.  I propped the hose on the fence of the deck and went inside to grab my camera. Took a few shots of him sitting there. Finished watering and back in the house. Then I got all these words in my head so had to write them down.  Another poem!
Then, after grabbing my water and coffee, off to the garden. Already hot out there and humid. Talked to a neighbor gardener and then started pulling the Japanese Beetle infested green beans.  Yes, we did put on Seven dust. Guess they were eating around it.  After 4 large refuse bags full, and me dripping wet, I left for home with produce in a 5 gallon bucket.
I bet you thought the bucket was full. Not hardly! Not even enough, really, to cover the bottom of the bucket.  The tomatoes I picked all have holes in them from bugs, (I am assuming that) and the two cucumbers don't look real good and maybe a handful of green beans off all those plants.  Yes, I took pictures of everything.  That's what I do. LOL!
I am home and have two poems written. One about the green beans and the first one about the chipmunk.
I am writing this blog and it's only 11:56 a.m. Central Time. 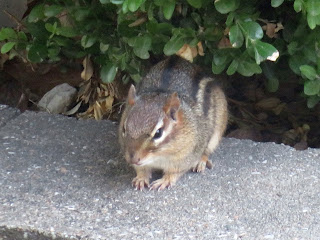 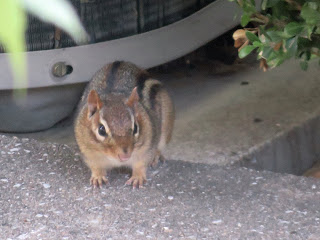 Nope, he’s still sitting there
The Chipmunk hadn’t moved
I took three pictures
So, the sighting could be proved

After all, I put out mothballs
To keep the chipmunk away
I see some telltale signs though
Which shows me they still come to play

They never figure out
When I water there, they grow
The little plants abound
I pull them and to the ground I throw

The chipmunk comes back
And digs several holes
But, no seeds does he find
He doesn’t meet his goals

Poor little chipmunk
He doesn’t understand
He will never get those seeds
So, this will be the end

My other poem I wrote was after I got home from the garden. 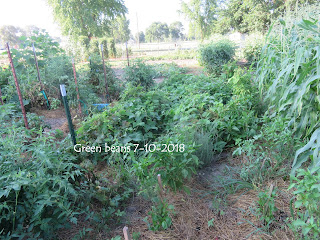 I went to pull the green beans
Where the beetles tend to play
So, I finally figured
These plants need to go away

By the time I get new bean seeds 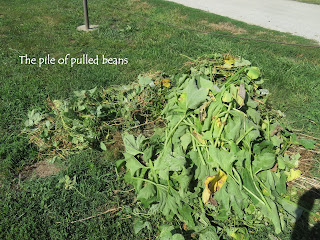 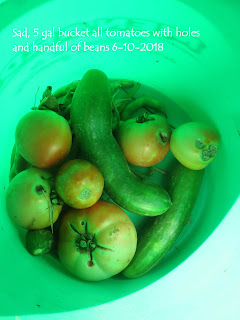 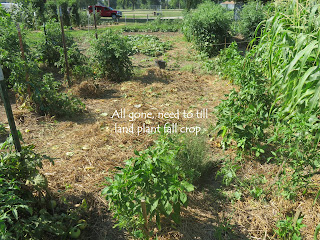 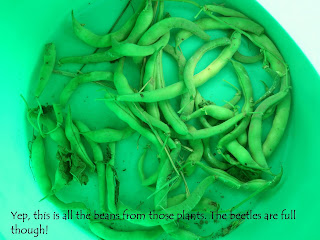