Today I worked in my yard. Of course I had a plan to work in the front, but the first thing I find myself doing is working in the back.
It started with the carrot box.  It's a planter that Jim built probably 3 years ago. Heck, as fast as time flies it could have been 4 years ago.  I have attempted to grow carrots and beets in this planter but it always has failed.  Critter invasion tearing it all up mostly.  This year, I again, attempted to grow some carrots.  On the left hand side of the box.  The right hand side I put in some pepper seeds from some peppers I had grown and some other seed that I don't even remember what I put in.  I remember being exasperated so dumped in a bunch of seed! Well, I got some carrots up and they were doing well until a critter, I think a chipmunk, went through the box digging along the way.  The other side, I thought I saw a pepper plant.  I kept on watering and the carrots, yes still some the chippy missed, are still growing.  The two, I think are peppers, are growing. Then there is the unknown. The kind of look like broccoli or something in that family and a ton of seed erupted out of the soil. Today I potted up 8 of them and left two in the box with the two peppers.  Seeing as there were so few carrots on the end of the box with none, I planted a purslane.  As I went to water, I notice some poke weed that was about 6 foot tall in the area I call the triangle.  I grabbed my clippers and cut them all down and put round up on them.  I then noticed all the sedge in the area. Never ending weeding.  I got to work and tried to get all that stuff out of there.  Finally, after about 2 hours I went to the front yard.  I was under the impression the landscaping outfit that mowed - did do the trimming. Evidently they do the trimming like the mowing and barely hit it or don't get close to the rock edge or something. It sure didn't look like the trimming Jim or I do. That's for sure! I am pretty sure it's Yellow Oxalis that I keep fighting. It loves growing in the sedum so very hard to weed out of there. The Kaleidoscope I trimmed earlier has got new growth and looking really nice.  Then there is the plant I transplanted to this area. It's a Veronica. 6-4-2018 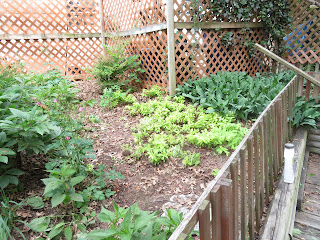 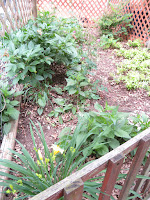 after the weeding
There is Lily of the Valley
The light green is St. John's Wort
There is a Stella 'd Orra just blooming and Peony that is done blooming.  The far bush in the right hand picture is a Nandina
There is come Columbine scattered around as well as Rudbeckia that has seeded in the area. 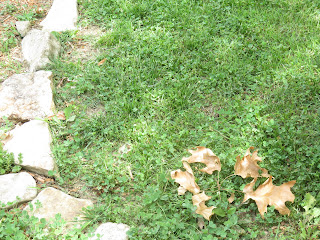 This is what the area looked like and it was supposed to have been trimmed by the landscaping outfit. 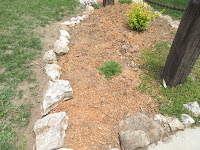 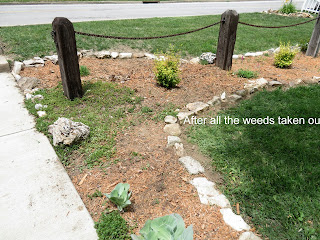 After I took out the yellow Oxalis and trimmed around the rock. I only was able to do this one section. Still have the rest of it to do but I ran out of get up and go. LOL!